What foods to eat when flying while pregnant?

Navigating which foods to eat when flying while pregnant is challenging. Not only does the body need more nutrients (and therefore a varied and nutritious diet) to support the growing baby, there are a range of foods that should be avoided due to the risk of causing harm to the baby. And on top of that, many pregnant women find themselves suffering from nausea which means they don’t feel like eating and can ‘turn off’ many foods. These factors can make eating a nutritious and varied diet difficult during pregnancy, even when you have access to a range of foods, let alone when you don’t have much choice in foods on offer like flying on a plane.

And I know how challenging this is, not just as a travel dietitian, but from first hand experience. I flew a number of times while pregnant, including long haul international Australia to Europe during the omicron Covid wave in January 2022. There were times when I couldn’t eat any foods served in the lounge or on the plane. This was because all the foods served where not recommended to be consumed while pregnant.

So why is this? And if you are pregnant, how can you eat safely while travelling on a plane?

Why eating while pregnant and flying is challenging

There are foods that should be avoided when pregnant due to the risk of foodborne illness, which can have dangerous consequences for both mother and baby. The main concerns are foods carrying Listeria, Salmonella or Toxoplasmosis. While getting food poisoning generally isn’t life threatening for the general populations, when pregnant it can carry serious risks for the baby, with the most serious being miscarriage.

When pregnant it is important to avoid foods that have a high risk of causing foodborne illness. This can be incredibly difficult when travelling, especially flying, as food choices are largely out of our control and are limited.

Common foods served when flying to avoid during pregnancy

Here are some common foods served in airline lounges, on planes and in airport food courts that should be avoided when pregnant:

NOTE: some country’s food and pregnancy recommendations can differ slightly so check the dietary guidelines in your country or the country your are travelling to. This is because the food supply may differ between countries, including how foods are made and processed which may affect whether foods are suitable for pregnancy. Please see here for information on Australia’s guidelines on foods to avoid while pregnant.

Suggestions of foods to eat when flying while pregnant

Here are some examples of foods to eat when flying while pregnant. These foods can be commonly found served in airport lounges and on planes:

Packaged foods such as chips (crisps), rice crackers, lollies etc are also suitable to eat, however I have not listed them as suggested foods as generally they are not very nutritious.

Tips for eating when flying while pregnant

Ask lots of questions from staff to understand more about whether foods are safe to eat. Sometimes it is not possible to avoid eating while travelling, but understanding more about how a food was prepared and where ingredients came from can help you make a safer, more informed choice. Here are some of the strategies I used to reduce risk of foodborne illness while flying when pregnant:

Please note this is general information. For more specific and individual advice on diet and pregnancy please contact your healthcare professional. If you are pregnant and would like tailored dietetic and nutrition advice please contact me to make an appointment.

My Interview on Nutrition for Long Flights 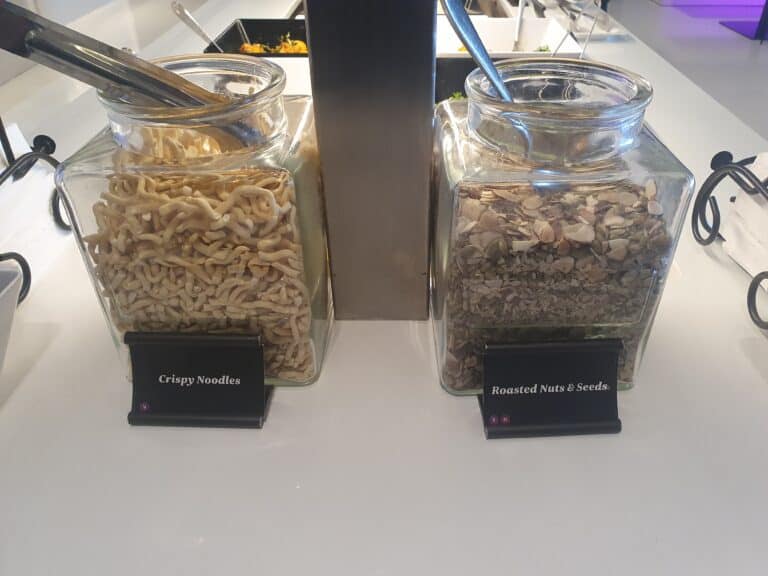 Why you should rethink snacks on planes. 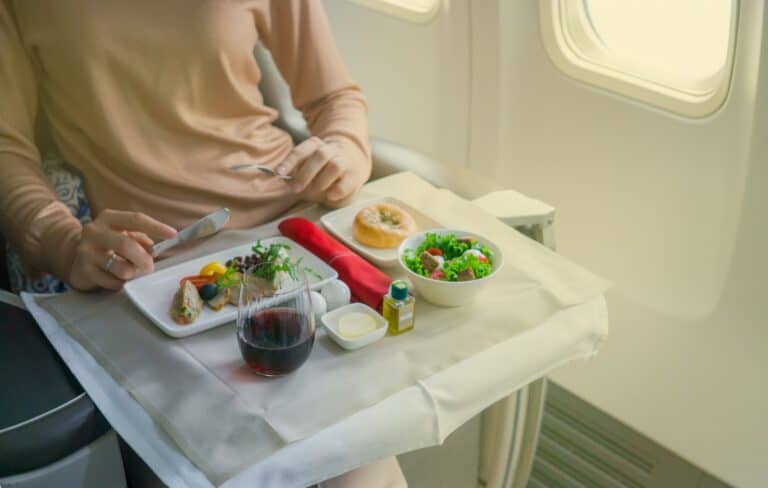 I love how @qantas usually has these in their domestic lounges. Makes healthy choices easier- especially in the afternoon period where it's not quite dinner time but you are hungry at the end of the day.

I'm in the Melbourne Business Class Lounge (domestic) and it's about 5pm - perfect for vegetable snacks with antipasto! And the best is I can now eat all the foods since I'm not pregnant anymore (my little frequent flyer arrived 2 months ago).

The view never gets old 😍

I'll be back in this lounge - the @Qantas Business Class Lounge (domestic) Melbourne in a couple of days.

Looking forward to seeing if Qantas has changed the food offerings up since I last flew in April or whether it's same old same old.

In the @qantas Business Lounge in Melbourne (domestic) when the sandwiches were basically just bread.

A month until I'm back seeing this fabulous view again! And this time it will be with the full First Class lounge menu for the first time since covid.

The last times I've flown out of Australia from Melbourne and Sydney in 2020/2021 Qantas had their hybrid Business/First lounges in operation. These lounges had a significantly reduced menu and weren't first class at all even though physically in the first class lounge. I reviewed both of these lounges during covid (you can jump on my website and read them) and have also reviewed pre-covid.

So now I'll be able to update the reviews - let's see @qantas what your First Class product is like now.